Posted on March 5, 2018 by JAMES A SINGER Owner of That Gun Guy Gun Shop

In my first installment of “Please Just Shut the Fuck Up Already,” I exposed the ignorance of people who advise the media on the subject matter of which they know little about. Now, I’m taking on an everyday person who has little original thought and tons of talking points from organizations, flawed polls from anti-gun media outlets…etc.

Today, I highlight the ignorance of one Philip E Jenks of Port Chester, NY. In his essay entitled, “Guns and the Yahootude,” he makes a number of assertions all of which are, of course, wrong. He engages in strawman attacks and is completely ignorant of current federal laws on the books. This is evidenced by calling for laws that already exist! He parrots the talking points of the main gun control groups as his “evidence” for his weak anecdotal arguments. Worse yet, he apparently knows very little about the Second Amendment and the Court rulings on the very Amendment that ensures Americans have the means to defend the other Rights enshrined in the greatest document ever written by man, save the Bible.

So, let us now delve into the genius who is Philip E Jenks. Allow me to start here:

“Probably Latimer’s decision is supported by the majority of his constituents, many of whom are appalled by the extremes the gun lobby will go to make automatic rifles and concealed weapons available to all.”

Mr. Latimer is a local politician who issued an edict that prohibits “gun shows” in public buildings.  The remarks about the “gun lobby” are as amusing as ignorant. Exactly what “gun lobby” or organization is calling for making “automatic” weapons available for all? I’ll wait while the crazies research that one (hint: it’s not the NRA). As for “concealed weapons,” people who are legally permitted to possess firearms, must be, not should be, must be allowed to carry firearms for self-defense and the defense of others. I’m not going to lay out the case for this view, as there are THOUSANDS of documented (by law enforcement) cases of self-defensive uses of guns every year. You know. Such as the Texas church shooting where a citizen retrieved his gun, an AR-15, shot the bad guy and chased after him thereby Preventing him from harming anyone else. So, yeah. Concealed carry should be available to all adults as a choice. The next point is as senseless as the last quote.

“Most Americans believe stricter controls should be placed on guns and gun ownership but these proposals have been consistently blocked by Republicans in Congress. Recent gun-related tragedies have been ignored by politicians except to express prayers and sympathy for the victims. it is a wonderment that Senate Republicans feel entitled to defy the wishes of the people they are supposed to represent. In my opinion, they are underestimating their presumed base, the Yahootude, into which I was born seven decades ago.”

Point of fact, “most Americans” do not want more gun control. There are OVER 20,000  gun laws on the books in our great nation. These laws do NOTHING to stop Criminals, who, surprise, surprise, Don’t Follow the Law! Hey, Phil, use some logic here…please. Think. If “most Americans” were in favor of more gun control (laws), why do these Americans vote for Pro-Second Amendment candidates? Oh, BTW, it’s not just Republicans. There are, in fact, millions of Democrats, elected and other everyday American democrats who disagree with the gun control idiots. Virtually every “demand” ignorant people cry for, already exist in federal law. Background checks exist. In Fact, the Instant Background Check System exists BECAUSE of the NRA pushing our legislators in Washington D.C. to create it. The NRA believed, and still believes in background checks. Point of Fact: Those Republicans AND some Democrats are NOT defying ” the wishes of the people…” If they were, they wouldn’t be in office. See how logic works?

Hmm…”And I have no doubt that my fellow Yahootudians think allowing terrorists, the mentally ill, and domestic abusers to buy guns is a dumb ass idea. And so is the idea of selling guns to anyone who wanders into a gun show.”

I could be wrong, but, I haven’t heard the NRA or any other pro-gun group call for arming “terrorists.” That’s what Democrats do..eh, Obama? Syria, anyone, anyone?? As far as the mentally ill, which ones? Just the ones who are a “threat to themselves or others?” Or, all designated as having any kind of “mental defect?” ADHD, people who suffer occasional depression, maybe people who can’t balance a checkbook (We see what you did Dept. of Veteran Affairs). And who decides who loses their Rights? What “Due Process” procedures are in place to protect my Rights or your Rights? As of right now, if I share the same name as someone on the “No-Fly List,” I’ll be barred from purchasing a gun! And there’s NO appeal process to get my name cleared and removed! What about my Rights? I suspect, Phil, you don’t give two shits about my Rights. As for “domestic abusers,” Let me educate you…The Domestic Violence Offender Gun Ban, often called “the Lautenberg Amendment is an amendment to the Omnibus Consolidated Appropriations Act of 1997, enacted by the 104th United States Congress in 1996, which bans access to firearms by people CONVICTED of crimes of domestic violence. That’s right Phil! The law has been on the books for ELEVEN years. You need to do your research before you make yourself look like a “dumb-ass.”

Hey, Phil! Gunshows are, in fact, where people “wander in” and may buy guns. That’s kind of the point of the show! I have not been to one single show in recent years where EVERY table rented for gun sales was NOT Required to possess a Federal Firearms License in order to sell guns. The only unlicensed selling going on are the private sales taking place OUTSIDE of the gun show premises, as PERMITTED by Law. I can do with my private property as I like. “The Gooferment” has ZERO say in my private dealings with other Americans. There are Tens-of-Millions of guns out there purchased through a private sale. There is no, nor will there ever be a way, to regulate this activity and, for good reason. I guarantee if “Universal background checks are instituted, you Big Dummies on the Left will be responsible for creating a HUGE underground Black Market in firearms being bought and sold buy Non-Criminals.

Creating a database of LEGAL gun purchasers is ILLEGAL under Federal law. And, it’s unnecessary. There are laws in place to track guns used in crimes. When a gun is found to be the instrumentality of a crime, BATF (Bureau of Alcohol, Tobacco Firearms Explosives) calls the manufacturer with the serial number. The manufacturer informs BATF what Distributor the gun was shipped to initially, then the distributor tells BATF what Licensed Dealer bought the gun. Then the dealer pulls their record of the sale and gives that information to BATF for law enforcement to follow up on. Problem solved, been working for YEARS. As for your 57% who want a ban on “assault weapons,” (see my essay, “Please Just Shut the Fuck Up Already” for an ACCURATE description of an “assault weapon.”) NOT true. If one explains what an “assault weapon” actually is, and not what people think it is, thanks, mainstream media, lying politicians, and ignorant people like you, Phil, their opinion CHANGES. I know this to be fact, because, I’m a law enforcement firearms and use-of-force instructor and, I educate people almost every day. Tell me, Phil, what exactly constitutes an “assault weapon?” I’ll wait while you shuffle through your anti-gun websites and propaganda to come up with something.

“There are reasons to be angry at Republicans who think they can defy public opinion with impunity and among the most important are the 58 persons killed and 546 injured last October when a gunman opened fire on a music festival in Las Vegas. Also, the 49 LGBT people who were shot dead in Orlando by a deranged man who had no difficulty purchasing a Sig Sauer MCX assault rifle.

The Las Vegas and Orlando massacres, which took place months after 9 members of Emanuel African Methodist Episcopal Church were shot in Charleston, S.C., are not isolated events. According to a count by the Washington Post, 869 people have been killed in 126 mass shootings since Aug. 1, 1966, when ex-Marine sniper Charles Whitman killed his wife and mother, then climbed a 27-story tower at the University of Texas and killed 14 more people before police shot him to death.”

Wow! Where to begin. As for the Las Vegas incident, proves once again that a CRIMINAL who commits himself/herself to a certain course of action will be successful without any information that can be used to stop them. Please note that these shooters did, in fact, PASS background checks! As for your citation from the Washington Post, I’ll refer you to my essay entitled, “Inconvenient Facts” to see the Actual and Accurate numbers with regards to gun-related deaths…it pays to do some Actual Research, Phil.

When “Former,” not “ex” Marine Whitman engaged in his criminal act, Whitman sawed off the barrel and buttstock of a shotgun, then packed it into his footlocker, along with a Remington 700 6-mm bolt-action hunting rifle, a .35-caliber pump rifle, a .30-caliber carbine (M1), a 9-mm Luger pistol, a Galesi-Brescia .25-caliber pistol, a Smith & Wesson M19 .357 Magnum revolver, and more than 700 rounds of ammunition. He also packed food, coffee, vitamins, Dexedrine, Excedrin, earplugs, jugs of water, matches, lighter fluid, rope, binoculars, a machete, three knives, a transistor radio, toilet paper, a razor, and a bottle of deodorant.

Hey Phil! Where is the evil assault weapon? Since 1972, there have been 96 “mass shootings (Depending on the definition of “mass shooting”).” Of those 96, ONLY 6 involved an “assault-style” firearm. So, an assault-style weapon was used 0.0625% of the time. As for the Orlando shooting, you leave out some pertinent information, by mistake I’m sure. You left out the fact that this was, in fact, an act of TERRORISM. The person who committed this horrible act was a MUSLIM who took offense to the homosexual lifestyle (although he engaged in previous acts himself). His MUSLIM wife was an Accessory Before and After the Fact and was put on trial. He was known to law enforcement before this crime. As a side note, the shooter’s father, who lives here in Orlando, claims to be the “Rightful President” of Afghanistan…Coo-Coo for Cocoa Puffs!

And finally, as for your, well, not really yours, you’re just parroting the Lefts bullshit, claim of…

If you count ONLY the actual numbers, true. However, if you are an HONEST researcher, or unnamed blogger, PHILIP E JENKS, you would do REAL research and use the Per Capita STANDARD when comparing the countries of the world and NOT cherry-pick your data! So, 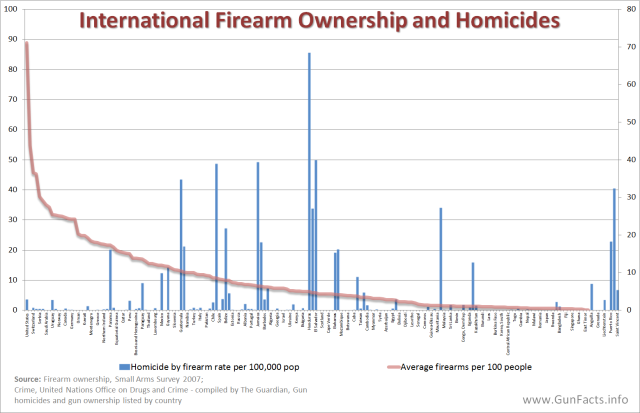 There are THOUSANDS of sources for Accurate data, like the U.S. Department of Justice and their UCR (Uniform Crime Reports).

I’m done “picking” on you, Phil. For now. Write some more stupid propaganda, and “I’ll be Back.”