Time for a National Purge of Our Educational Institutions 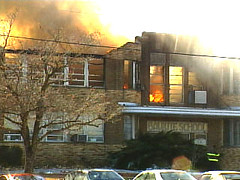 Just when you thought the “educational” system in Our country couldn’t be worse, it continues to surprise. As angry as I get at these spoiled little brats, who still suck off the teats of their parents, have ZERO ambitions other than the “revolution” (whatever that entails), I know that to some extent it’s not ALL their fault.

I’m pissed and have reached my limits. I’m tired of those assholes in academia pushing…no, Force-Feeding an anti-American agenda down the throats of Our children who don’t have the knowledge nor the experience push back. The parent(s) don’t push back because they are not aware of what goes on their kids’ school room. They fail to realize that “teachers” are people too. They have their own prejudices and agendas. And, that they quite often incorporate these biases into their everyday lives to include the classroom.

I’ve noticed a disturbing trend. This programming of our kids has become exponentially worse over the last 15 years or so. In past years, one would occasionally read or watch a news story about that one college professor out there in crazy land attempting to indoctrinate our kids in the way of socialism. Now, the crazy ones are the ones who still espouse the virtue of American exceptionalism.

With the advent of social justice, this “Grand Experiment” called America is in serious danger of forever being degraded into another third world country only with better tech, beer, and dancing with the stars.

I’ve spent the last week reflecting on the last eight years under President Obama. For eight years I’ve watched society regress fifty years with regards to race relations. Frankly, I long for the good ol’ days of the KKK yearly march of ignorance or the stupidity and dangerousness of groups like Nation of Islam, or the annual Al Sharpton show of Blame Whitey (for Everything).

Over the last eight years, we have reached the point of continuous outrages from the left. The manufactured lies of injustice and continued exploitation at the hands of white people. Now we have BLM (Black Lives Matter), the New Black Panthers and others who want to blame whites for every woe they suffer. Which brings me to University of Hawaii mathematics professor Piper Harron.

Harron has a deeply ingrained hatred for white people.  In a recent hit piece titled, “Get Out The Way” (Posted on the blog site belonging to and endorsed by, the American Mathematical Society http://blogs.ams.org/inclusionexclusion/2017/05/11/get-out-the-way/), she pulls no punches with her opinion regarding White (cis) Americans. Take the following.

“Not to alarm you, but I probably want you to quit your job, or at least take a demotion. Statistically speaking, you are probably taking up room that should go to someone else. If you are a white cis man (meaning you identify as male and you were assigned male at birth) you almost certainly should resign from your position of power.”

She continues…”Remember that you live in a world where people don’t succeed in a vacuum; most success happens on the backs of others who did not consent. You have no idea how successful you would have been if you were still you, but with an additional marginalization (not white, or not male, or not cis gender, or with a disability, etc).”

The bottom line is that if you’re  a white person, your success is not yours. No matter how hard you work, no matter the hours you, as a white person, put into achieving your individual success, you have victimized a person of color…er, “marginalized person” along the way. However, she has no issue stepping all over your life or your Rights in order to achieve the lefts/communists/socialists goals. The following is her message to her white colleagues in academia…

“Well, as a first step, at least get off your hiring committee, your curriculum committee, and make sure you’re replaced by a woman of color or trans person.”

She ends her blog piece with…”This is not about shame or guilt. Those things are useless. This is about shifting perspective. I know you’re not going to quit your job, but I want you to understand that you should. And to understand that by keeping your job and your other unearned privileges, you are running a continued debt to marginalized people and you should always be seeking ways to pay us back.”

Pay who back for what? Of course, the “marginalized” that she speaks of, is code for Black people. This comment is right up there with another race baiter who states that white people should open a separate bank account and deposit portions of their hard-earned income for the express purpose of reparations. That those monies should be “given” to people of color to begin to pay for our (white) privilege.

Looking at the Above table, exactly where is the “white privilege?” Yes, the poverty rates for whites is the lowest at 9.1% compared to blacks at 24.1%. However, this is based on population percentages. If you look at the actual number of White Americans in poverty, they far outnumber every other race (They won by popular vote…Hillary?). In fact, the number is actually higher since “HISPANIC IS A CULTURE, NOT A RACE!” If you’re Hispanic of European descent, you are in fact a member of the white/caucasian race! This is one of the things that I really hate. How all of these special interest play with definitions of words in order to push their group’s agenda. And, a large portion of America is just intellectually lazy enough to just accept the bullshit they’re being spoonfed.

It’s one thing to be an “adult” choosing to be willfully ignorant of facts and truths, however, it’s another thing to brainwash Our kids. Kids will observe and soak up everything they see and hear (I really need to watch my language around the three-year-old). For example, we also have an eight-year-old at home. Not a week goes by without a comment about the Evil President Trump from him. It’s one thing to educate your kid, to raise him/her to be a decent human being and productive citizen. You hope they grow up with the ability to make reasoned decisions. But, that’s not what we have now. We have publicly educated kids who have been taught to act and “think” collectively. Individualism is seen as almost…well, evil. The very freedoms in Our Constitution are seen by this current generation as something evil as well. Our Founding Fathers viewed as nothing more than evil slave owning capitalists with bad wigs.

They have virtually no ability to think beyond the next pleasurable experience. The next “need” like the new iPhone, car…etc. Just watch non-mainstream media news station (FOX News) when they interview college age kids. They’re complete morons. I dare you to go to the next big protest featuring ANTIFA…i.e. spoiled brats running amuck. They can’t even spell “critical discourse” let alone engage in it at any point.

We all rant about things that concern us. We worry about immigration, the economy, terrorism, race relations…etc. However, it all comes down to “how” we educate or allow the “state” to educate Our children. Too many “parents” are content to turn over control of our children’s minds to the “schools”.

Bottom line, compared to years ago when “educators” like professor Harron above were the exception, instructors like her are now the rule. This situation will not be corrected until we (the grown-ups with long pants) rise up within our communities and retake the reigns of educating Our children. We must demand the withholding of tax dollars to colleges and universities who refuse to educate our kids minus the political agendas. If necessary, Americans who still believe in Our Constitutional foundings must rebel against the assaults that our kids face every day. I truly believe that the majority of this country (Those who voted for President Trump) should just STOP paying taxes and/or filing returns. Just REFUSE to comply with the arbitrary whims and corruption of those we elect to office to “represent” us but, rarely do. America is a community, the foundation of which are the millions of individual families.

Hate President Trump, his cabinet picks…etc. But America has been given a gift. When you are offered a school choice voucher, take it and choose wisely. The future of YOUR country is riding on the choices we make today.