The West Continues to Ignore the Truth.

Posted on January 9, 2015 by JAMES A SINGER Owner of That Gun Guy Gun Shop 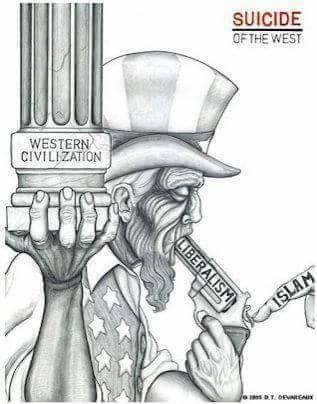 “There is a fundamental disconnect between views of civilizations. Radical Islamists have no intention of assimilating into their respective cultures or contributing to any kind of meaningful dialogue about religion and free speech. They are intent on terrorizing western citizens out of exerting their rights. Their plan of terrorism and intimidation, with the ultimate goal of imposing their religion on others, is fundamentally anti-American and is not meant for the 21st century.”

Why does it seem that many Americans, as well as people abroad, get it, however, Our “leaders” seem to lack the most basic understanding of Islam? Our “leaders,” aided by the media tell us that….” they’re NOT real Muslims, they’re a cult who uses Islam as an excuse, so-called “moderate Muslims” don’t support nor agree with these “CRIMINAL” acts?” A lot of citizens have a near zero understanding of what Islam really encompasses…” In fact, Islam teaches that this message of the Oneness of God and the brotherhood … is the thread which runs through the entire fabric of the Islamic way of life.”

That “entire fabric” includes home, family, culture, and POLITICAL. Islam is a political and socio-economic construct. It is all inclusive, there is no separation of the religious from every facet of a Muslim’s everyday life.

Even when faced with these facts, the western media, directed by our politicians, to intentionally mislead us into believing that we have to accept more of these “people” into our culture and accept them refusing to assimilate, allowing them “rights” the rest of us don’t have like religion in public schools. They move into neighborhoods and once gaining a foothold, begin to systematically employ pressure against their neighbors until they move out leaving entire sections of major cities under the control of a FOREIGN entity operating under Sharia Law. There are sections of major cities in Europe where the police WILL NOT go into. These areas are “controlled” under Sharia Law. They operate their own government, businesses, AND law enforcement (Sharia Patrols). These “Sharia Patrols” are the enforcers for the Imams and have no respect for the rights of Non-Muslims living in these areas. Effectively, creating a nation-state within a nation-state. With the political and judicial systems in these countries enabling all of this because of the mental illness called “multiculturalism, Tolerance, Political Correctness…etc.”

In the last three days, we have witnessed what these policies have wrought. In the spirit of Neville Chamberlain, Europe is committing cultural suicide aided by a Biological Jihad. Europe as a whole is “pulling the trigger” on itself. The Europeans are not having children at the rates necessary to maintain their cultures. In order to maintain one’s culture, the Minimum child birth rate is 2.11. Most of Europe is around 1 or less. Muslim birth rates are on average, over 8! The silver-lining in this is that the out-right murdering in indigenous populations will begin to wain because soon, there will be more of them, in effect breeding the traditional European peoples out of existence. Math doesn’t lie.  ( http://vimeo.com/98572182 )

A perfect example of the U.S. media’s complicity with its own Government in LYING to the American people about the truth and ultimate goals of Islam can be seen in the following link. This week, France saw the worst acts of terrorism since the 60’s and 70’s by Algerian Nationalists. MUSLIM terrorists attacked multiple targets in and around Paris. When actual victims began to speak about their experiences, the New York Times printed, THEN quickly deleted, and reposted a victim statement AFTER they had time to “sanitize” and downplay to the role that Islam played in the incidents. Don’t believe me, here is the link that PROVES my claim. (http://dailycaller.com/2015/01/08/new-york-times-reports-on-muslim-proselytizing-during-charlie-hebdo-attack-then-deletes-it/ )

The Lame-stream…er, Mainstream media is putting these so-called Islamic leaders and scholars on television screens everywhere reportedly condemning the actions of these members of the Islamic “fringe” element (If you consider over 800 Million (50% of ALL Muslims are either active Extremists or Support and/or Endorse that “fringe” element). ( https://www.youtube.com/watch?v=g7TAAw3oQvg) Then moments later, they blame the VICTIMS of these terrorist acts. “If only they had not said that….printed that…sang that song, danced, prayed to wrong God…” You get the point.

We are told that there is this phenomenon called the “Moderate Muslim” who doesn’t support violent Jihad. What they don’t tell us is that while “they” say “they” wouldn’t engage “actively” in a terrorist act, “they” sympathize with their Muslim brothers struggle. Here is a sample from a PEW research poll:

Pew Research (2011): 8% of Muslims in America believe suicide bombings are often or sometimes justified.” There are over 9 MILLION Muslims in America. That means there are 72,000 Muslims running around America who don’t have a problem with blowing people up. Those “people” include you and me. How do they feel about al-Qaeda?

Pew Research (2011): 1 in 10 native-born Muslim-Americans have a favorable view of al-Qaeda.

So, the next time some idiot says…” Oh, you’re just paranoid. American Muslims are different. They enjoy the lifestyle here…”, Point out the above information.

“Fact, Muslims, unlike any other group of people, never seek to simply quietly assimilate into the lands in which they travel. They build their numbers, and as soon as they do, seek to exert their will over their host country. I cannot think of any other group of people who do that. There are millions of Jews living in America, I have yet to see a rally or protest where they demand anything. Islam IS the HIV of the world and Individual Muslims are the virus.”

America is NOT immune to Islamic Terrorism. It happens regularly. However, Our Government, with the complicity of the media, television, radio, print and popular culture, have manipulated and outright LIED to the American people. All of these acts are “criminal acts, you know, robbery….domestic violence, workplace violence or the acts of a mentally ill person.” Muslim fathers mutilate or kill their daughters in “honor killings” are in fact a domestic violence issue, Muslim husbands who cite the Quran when confronted for killing or nearly killing their wives, have those facts  “scrubbed” by the media, again just your run-of-the-mill domestic. Muslims who shoot, stab or say, CUT THE HEADS OFF OF COWORKERS, are of course just engaging in workplace violence. The FACT that they attempted to convert said co-workers to Islam (with no success) and SCREAMED “Allahu Akbar,” Surely had absolutely nothing to do with Islam or what was a terrorist attack. Just two days ago, a Muslim in Ohio, attempted to purchase a ticket at an airport with a stolen I.D., then attempted to stab an airport police officer. Or, how about the MUSLIM U.S. Army psychiatrist, Nidal Malik Hasan, whom everybody KNEW had and EXPRESSED Extremist, radicalized views,  fatally shot 13 people and injured more than 30 others in 2009. Again, the Muslim convert, screamed  “Allahu Akbar,” while murdering and attempting to murder 43 U.S. soldiers. Our Government has gone as far as to REFUSE the brave and honorable soldiers the pay and benefits DUE to them being murdered and injured by an Islamist “During a time of war” Nope. The Government says it was just a case of, you guessed it, “workplace violence.”

As you sit on your comfy couch thanking God that your neighborhood is peaceful and quiet, I’m going to burst your little bubble of security. While it’s true that we don’t have Sharia controlled neighborhoods we ARE NOT out of danger. As I write this, there ARE in fact over 35 Islamic Extremists Compounds engaging in military training. Training to KILL you and take your country from you. And, They are RIGHT HERE IN AMERICA. Here is a link to follow. Watch. http://www.military.com/video/operations-and-strategy/domestic-terrorism/terrorist-training-camps-in-the-us/660940716001/

Wake Up! Educate yourself or become the beggar to your own demise.

20 Responses to The West Continues to Ignore the Truth.